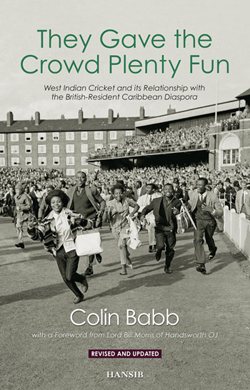 In 1948, the Empire Windrush ship sailed from Jamaica with more than 400 Caribbean migrants seeking to create a new future in Britain. Two years later, the West Indies cricket team beat England for the first time on English soil at Lord’s.

For some Caribbean migrants, and their descendants, who settled in Britain from the 1950s onwards, West Indies cricket offered a source of self-esteem. Whether they were passionate cricket fans or not, cricket provided the diaspora in Britain with an opportunity to express a collective sense of West Indian identity.

They Gave the Crowd Plenty Fun reflects on events that influenced the development of the social impact of cricket on British Caribbean communities from the arrival of the Empire Windrush onwards.

They Gave the Crowd Plenty Fun also explores factors which have challenged cricket’s position as a social force for the current descendants of the Windrush generation. I also reflect on my life, with a dose of humour, as a second generation West Indian boy in 1970s/1980s Britain.

Buy They Gave the Crowd Plenty Fun now for £10.00 (includes postage/packaging, UK only).

They Gave the Crowd Plenty Fun is available from Turnaround Publisher Services for bookshops and online retailers.

Donating They Gave the Crowd Plenty Fun to the National Library in Georgetown, Guyana.

Much More Than a Game: John Stevenson for Black History Month.